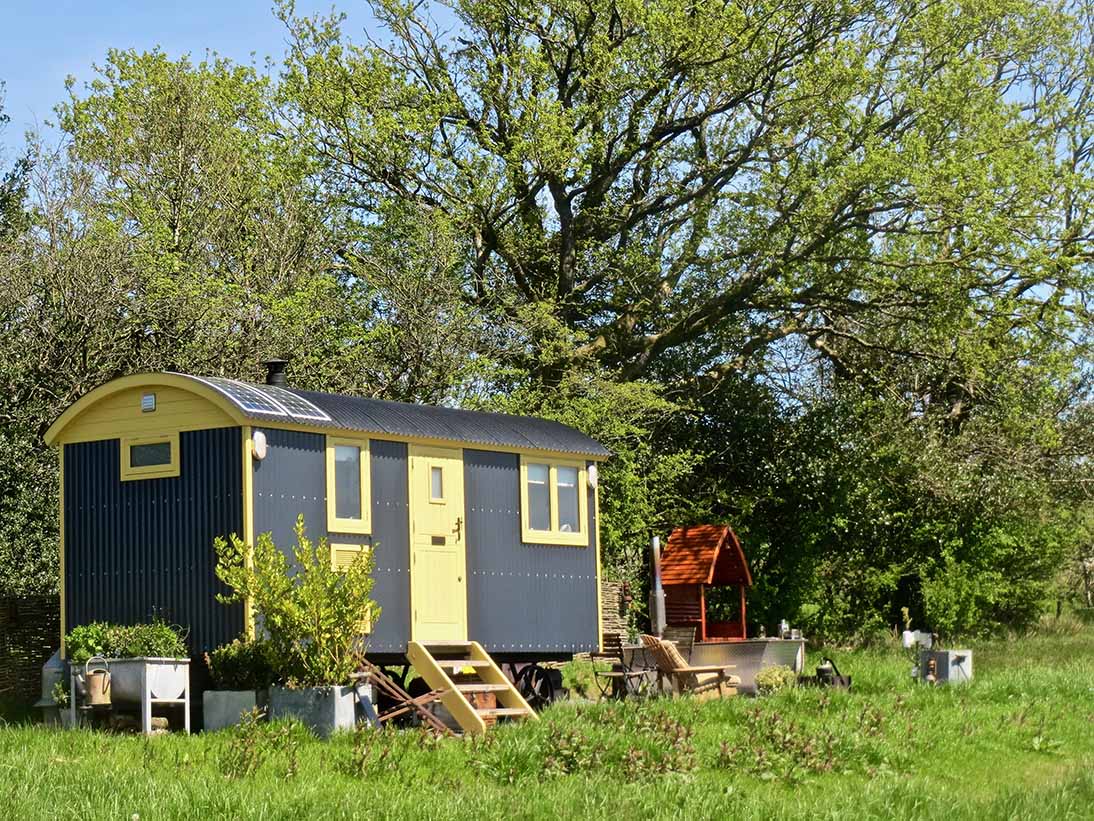 We invited Journalist Chris Inge, a glamping expert, to stay at Tor View. Here are his thoughts…

ON TOP OF THE WORLD – AND KIND TO IT, TOO

I am on top of the world – well Somerset, which can feel like the same thing if you are luxuriating in a hot tub looking out across the Mendips to Glastonbury Tor.  The temperature is a muscle-relaxing, tension-banishing 43-degrees Centigrade; behind me is the hoarse whisper of a wood-burning oven gathering the heat it needs to bake my dinner.

You have heard of glamping, obviously.  But you probably associate it with luvvies in yurts, flunkies in tow, doing Glasto without the mud and the plebs queuing for loos.

Think instead of, well, Len and Ted, non-flimsy-canvas alternatives which have gone back to the future to re-invent the traditional shepherd’s hut – the kind you might have seen trundling from field to field in the small world conjured by Hardy in Far From The Madding Crowd.

Phil Russell makes no claims to be a pioneer, but he was certainly one of the first adopters.  He built Len with his builder here on-site, drawing on the can-do spirit of his farming grandfather, and commissioned Ted to conform to an ambitious green blueprint. So, while other “glampreneurs” offer the hut experience, Phil gives you a choice – and it is a fundamental one: mains electricity and a luxury specification or a more radical alternative, powered by the sun’s rays and heated by a wood-burning stove.

Having never spent a night under a solar-dependent roof (and feeling suddenly guilty about my diesel car and oil-heated home), I plumped for Ted.

I loved the exterior: all grey-blue wriggly tin, with the UV panels cleverly curved to integrate with the roof, and custard-yellow windows either side of a stable door.  Beyond it, sited north-south to make the most of the iconic view, early or late, was the hot tub, steaming in welcome. It was worth the 110-yard trudge from the farmhouse for the immediate feeling of privacy and grateful isolation.

Inside, you have to marvel at how much comfort and convenience can be packed into a space measuring little more than 18’ X 8’.  At one end, Ted featured an handsomely appointed shower-room with basin and loo, and an impressively responsive boiler; amidships, was a small but comprehensive kitchen unit, housing a gas hob and fridge and good storage under the sink; the opposite end is taken up by a large and inviting double-bed with a mattress so comfortable it dominates much of the comment-pages in Ted’s boast book.

What turns a cheer into a frown is that the bed is fixed.  Other huts of my acquaintance feature beds that retract into the rear wall, releasing space for a general purpose table and chairs available for eating and drinking, playing games or even working if (perish the thought) you can’t leave the rat race behind.  The only table space here is low and small, with drawers that contain cutlery and kitchen implements; the two stools that fit under them are too low to be long-term comfortable or useful.

What this means is that, as and when the weather turns or darkness falls, the bed has to combine the roles of sofa, reading space and relaxing zone.  It took me back to student days – though my coin-in-the-meter existence was nothing like the sophistication of Phil’s solar set-up: read his guide-book; familiarise yourself with the three faces of solar (charging, discharging, empty), and above all be aware of the switch by the bed which channels electricity to the lights, sockets and hot water system.

It sounds complicated, even limiting; in fact, almost everything works by common sense and is clearly labelled.  In any case, even in the West Country the sun never hides for long, and when he comes out to play Ted comes into his own.

In addition to the outdoor oven, there is a fire-pit.  Along with an eccentric, chain-link deck-chair, you’ll find a sensor-lit bower, near the hot tub, looking south.  There are walks to enhance and entrance on your doorstep; honeypots like Wells and Glastonbury to explore; real ale pubs and creative, good value restaurants.

Phil’s copious notes contain all this knowledge, with directions, and more.  But what he does not attempt – because it would be presumptuous, and so wrong – is to describe the lure of the Ted experience: that feeling I described of being on top of the world, yes, but also out of reach of its problems.  Alone or together. Able to walk, to think, to dream without fear of interruption.

And with a clear, green conscience.

Happy Birthday to us!

We’ve got something to be cheerful about – our birthday! Yes, it is 12 years…